25 April, Vänern with a youngster fishing with me. 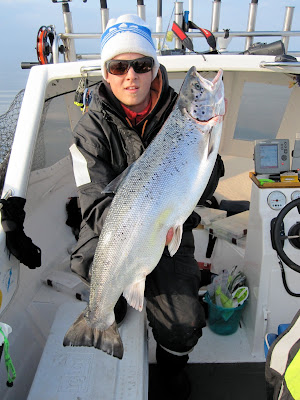 Raports from good fishing in Dalbosjön, Vänern made me and Linus take the boat on the trailer and go fishing there. The fishing south of Klasgrund towards Måken lighhouse was really good and had been so for some days. When we got there, looking at the amount of fishingnets laid there, it must have been pleny of fish on that location Plenty, plenty fishing nets there! I heard rumours telling there was 500kg. salmon in some of the nets. Wonder how many of them were wild fish, ment to be thrown back!
Anyway, some boats made really well during the day, catching fish more or less easily. Those boats had their positions saved from day before, and they were rewarded for the work trying to find the fishy spots, with filling their limits with three fish/person. Some of them compeeted in the fishingcompetition, some as we, didn't.
The water was really cold, not reaching 2 degrees anywhere. Of some reason we found our fishes on even colder water. The two salmon we got was taken on baits rigged on the downriggers. The big one took on a watermelon UV headed baitfish on 26 feet and the smaller on a chromeheaded bait tackled to a VK-salmon flasher. It bit on 30 feet. We had an undersized salmon and a good fish lost too, and some bites on the baitfish we failed to see the strikes at.
Very tricky fishing it was. We got some positions from Johan, Team TOK and Robban at fishonnet, (thanks, i will reward that). Those positions worked fine! Thanks;-).
Young adept Linus did really well today. This adept will be on the Warrior more times.
I will be Back to Vänern on friday. Trying to catch big trout:-) 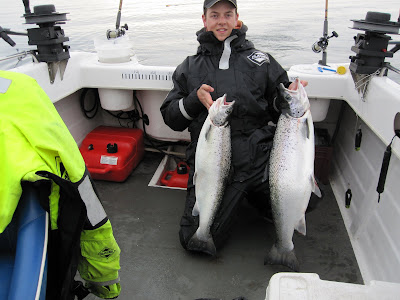 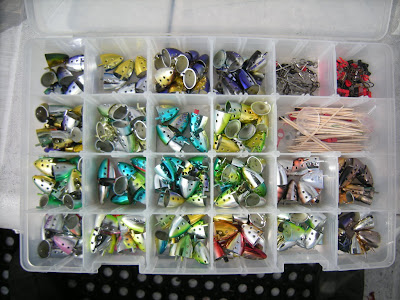 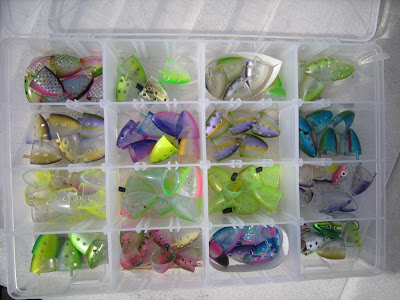 Pertti, skipper on Team Salsa/Suzuki Finland is one of the creators behind new colours on Salsa baitheads. Most of what is seen in these tackleboxes are prototypes, ment to be in production if testing works out. We tried out some new chrome and UV-colours with fishscaletape. They look really good and they worked fine in the clear water north Brommö.
kl. 23:08 No comments: 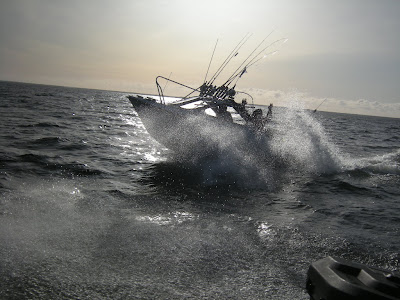 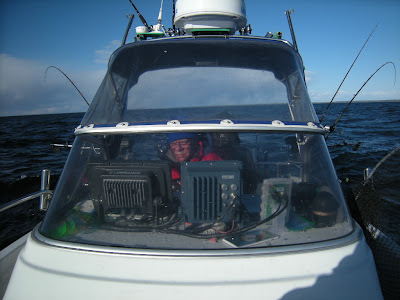 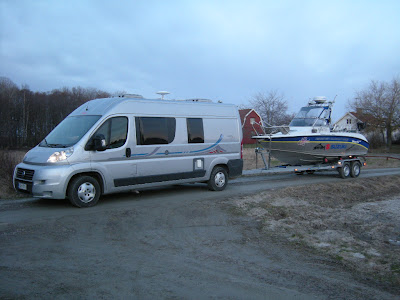 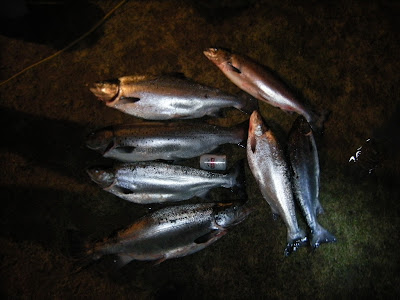 Photo is taken on sundays catch. Three boats took these. Four of them is from Brommö, rest is taken from waters around Pålgrund.
kl. 21:44 No comments: 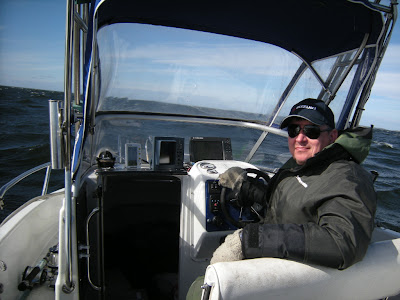 Today a fishingboat from Finland got problem with boat taking in water. The boat went down fast, but the crew managed to call for help with VHS-radio. They were picked up by other boats fishing in the same area, before Sjöräddningen got there. I believe sjöräddningen managed to save the boat, but i'm not sure. Fishermen atleast survived the cold swim. Reason for the accident is not known, but the boat was taking in water very fast, so there must have been a bad connection somewhere, taking in water, little bit at the time, till it was enough, and the boat went down. They had good fishing this morning, so they might not have observed there was somthing wrong with the boat.
I have been fishing east of Kållandsö today. There was a little bit calmer, but wind was more then 10m/sek, so it was a very bumpy ride back after we had fished our way north for some miles. Got nothing today.
+1.7 degrees warm water wasn't making the fishing better. They have warmer water in Brommösund and shelter from the strong wind, so that's where to go fishing tomorrow. There will some boats there. That's good, considering anything can happen on the lake, boats sinking aso. So, it's good there is someone not far away if something goes wrong. There is not really swimmingtemperature in Lake Vänern now!
Pics from todays fishing. I fished with Pertti Nevalainen, Finland, from his Silver 605 Wa.
kl. 16:42 No comments:

Went to Hästholmen, Lake Vättern on sunday. Testing the boat and equipment. Northerly wind, 5-8m/sek. I didn't have a clue where to start fishing so i went up to Stocklycke, went west from there, fished my way out to deeper water. Tried to fish over some spots that have given fish before. Continued fishing my way down to the pumphouse, trying to find a spot with little warmer water, but failed doing that. Warmest water i found during whole day was a so small that i almost missed it on the fishfinder. +1.1 degrees, 1000m west the pumphouse ! Average temperature was some +0.8 degrees. Not very warm, but some people caught fish anyway. There was this Grandslam competition. 20 boats taking part. I had my mother and another friend with me. None of them experienced in fishing from a boat, so i didn't join the 20 other boats in the competition. But, thanks, Team Gesse for asking;-) Maybe next time!
Anyway, I used my baitfish, but should have used smaller minnows this day, since that's what i was told the fish bit on. Plastic, lightly weighed down in the surface was the melody. I still went for using my baitfish. It's fun to try to get a nice, fishy swim on the baits, so i did that. I simply had to since i forgot the tacklebox with the small Conrads and Strike Pros home, so i just played with the baits whole day long. I also forgot the sparebatteries to the camera, so there where not a single photo taken this day.
Credits to the fishermen who managed to catch fish i the GrandSlam competition. Not so much credits for some boats fishing closer then 300m out from the cliffs. They might have found small spots that held fish, but thats not a reason to fish in front of the people fishing from the cliffs. Those fisherman sometimes use not so visible clothing, hard to see, but they can sit there and try to catch fish too. So, regardless if there is people visible or not fishing from the cliffs, i think we boaters can stay outside 300m from them. Besides that i believe it's forbidden to to go closer then that.
Everything on the boat worked fine today. So did, my new car. With the Skoda Scout it was really nice to pull the trailer:-)
kl. 21:49 No comments: 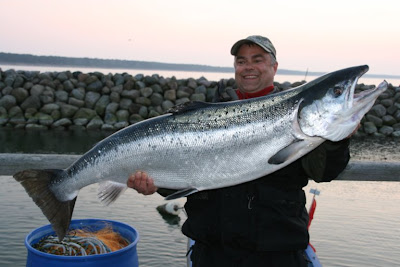 Look at this salmon caught by fellow two German fisherman in 2008 from Rügen, Germany. The fish was caught with Vuoksiraksi baithead with an unknown bait tackled to it. The salmon weighed 22.4kg and was 1.30m long! A fish to be remembered.
Late congratulatios to the fisherman. These German fishermen will be rewarded by Vuoksivieheet for this catch.
Season has started late in Rügen, three months delayed! Salmon is at those waters now, so it will take some time before they reach Swedish costal waters moving further north to their spawningrivers. I have booked accomodation on Hasslö, Karlskrona week 19, and hopefully the big forerunners are there at that time. We will be some boats fishing there. I will fish with Bert Lachner and he has experience from fishing those waters, with many nice salmon logged on him. Looking good!
Thanks to Sven Hille for the information about the giant salmon. Never to late to report a nice catch.
kl. 22:46 1 comment: 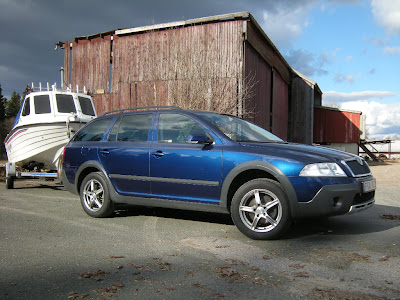 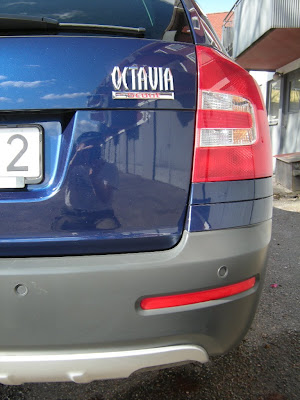 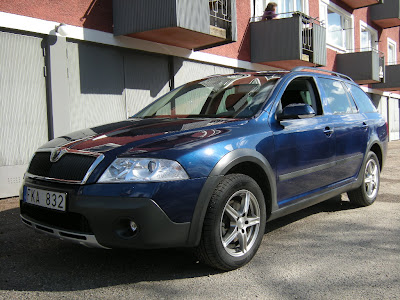 Yesterday i went up to Vårgårda and picked up my new car. I took my bicycle the 85km, made the deal and went home a lot more comfortable in the Skoda Octavia Scout. It's a dieselengine in it and 4x4 by haldex. Perfect to bring my boat around to where ever i want to fish. Lots of space and much safer then the old Volvo i had before. It has nice things as powerwindows and AC. Things that i never have had in my earlier cars. This will be just fine!
kl. 21:46 1 comment: 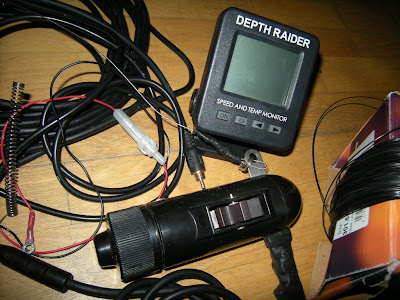 Dephtraider for sale. This unit is one of the best to measure speed and temperaure. This one is the first in Sweden. Kell laboraties in USA recalculated the software so Dephtraider showed the speed and temp in kmh or knots and celcius. This unit is little bit unique, since it's the first Kell laboraties sent us after we convinced them there was a market for Depthraiders here in Scandinavia. All they had to do was set the numbers so we could read them. And they did. This is unit nr.1. It has worked perfectly for many years. 2500kr is what i want for it. More info? Call or mail me. 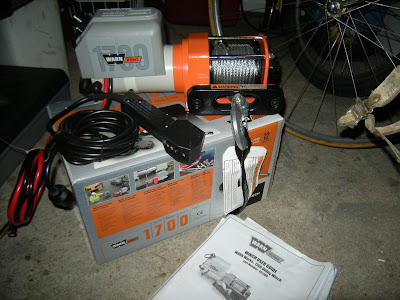