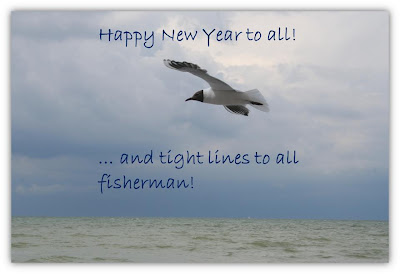 Sven made this newyears gretting. He let me use it on my blog so here it is.
Happy new year to all fisherman and everybody else too.
This year I'm going to fish a little bit more and even work a little bit more with horses.
I'll make things a little bit different and maybe learn some more new things thay way.
A source for energy, inspiration and healthy living is fishing. So let's do that;
Lets go fishing ;-)
kl. 21:32 No comments: 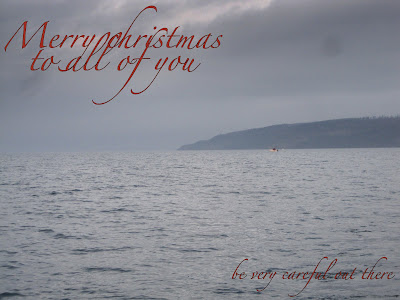 Last week was windy at Lake Wättern. Team Suzuki-Salsa still had their christmastrip settled for trying to get a salmon or two. They come every year and stay at Borghamn hostel as their base. This years catch from the lake was good. Both in numbers and size the salmons caught made their trip rememberable.
I visited them one day and managed not to catch even a single little char during the whole day. There was two fishingtournaments going on around us, typical enough. Only a few salmons caught that day, no big ones, so no  big deal not getting any fish at all that day. I was still busy trying out my new Pentax k-5 camera and all shots from now on will be taken with that camera.

Suzuki- Salsa had during the week nine salmons and seven char caught. At least this is what they raported. They didn't fish every day due to windy conditions, so the average in fish caught was something like one point five salmon and one char caught per day during the week.
There is fish in the lake but it´s not an easy task to go and get them in wintertime. Team Suzuki-Salsa did that well.
Average wind was something 13m/sek on the days they fished! How do you set a baitfish to swim i those conditions? I use Vuoksiraksi since they are easy to fish with but everything works if you know your tools.

Even though we didn't get any fish the day i fished with them i had something really nice with me home.
Pertti Nevalainen paints Salsa Lures baitheads and flashers and i had two of theese custompainted flashers given to me + some baitheads. Thank you very much and hyvää joulua :-)  T: Jussi

Salmon fishing in the pacific ocean.

This is a nice way of fishing salmon. Boats aren't to big, and they seem to get some good fishes too. The launching of the boats and taking them out of the water is quite spectalular. I think it's a good idea to use a boat made of aluminium for this type of fishing, eh? But  i think the boat in the clip is made of plywood. With epoxy it's a very strong and light method to build a boat like this.Boats with flat bottoms seem to be far more useful as it looks like. Maybe getting time to settle for an even smaller boat for me? This clip is from the west coast in USA. I found it on vetouistelu.com
ps. Notice the santafigure in some parts of the clip.