Extra concert on regatta 2010 in Varkaus.

Here it is, the extraconcert on the Steamshipregatta this year in Varkaus, Finland. Very spectacular. Just listen! 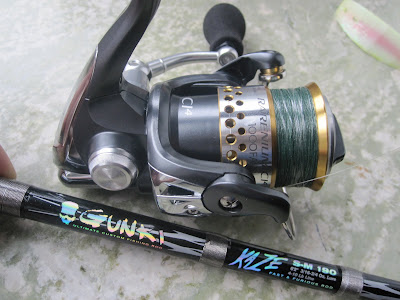 A new fishingreel and rod for perchfishing. Shimano rarenium 1000 ci4 and a Pezon-Michel Gunki Kaze is new material for my jigging after perch. I bought them from

the address below. 95€ for the rod and 160€ for the reel. A lot less than in sweden. I Like fullcarbon rods. Very sensitive and longcasting, but i find them somewhat expensive considering how fragile they are.
I found out this summer that powerwindows on a car and temporary bad memory is a poor combination when good fishing is on.
That cracky sound when an expensive fullcarbonrod brakes is unmistakable and good for me i have several rods at our place so a new rod was not needed right away, but a replacement had to be bought.
I like smaller reels and this shimano rarenium will be just fine. Made of some spaceshipmaterial. Really light and looks good. Hopefully it handles braided lines better then my old Shimano Sedona 750.
www.mur-tackle-shop.de 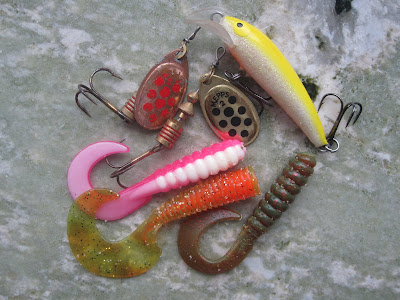 Theese lures and baits are what we needed this summer to keep the smoker and the fryepan going every day. Perch, pike and trout likes theese baits!
Mepps size nr:2, Yum and Storm jigs and that little yellow handmade minnow from a local minnowcarver. Weird colours on the jigs and the minnow, but somehow they work. Perches are like humans - they also like colourful, fancylooking things!
kl. 12:17 No comments:

Perch that thought they were trouts! 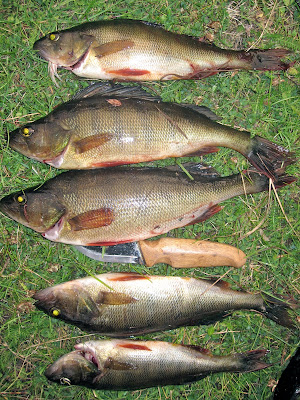 Look at these perches! Fantastic colour on them, isn't it?
I was checking out one of my spots in Lappland. A small creek doesn't look like it can hold big fish.
But it does; I had a really good looking trout biting my spinner there a few years ago. I never managed to get it up, but i had it on the hook long enough to see it was a fairly big fish, considering the stream is really small. The fish was some 55cm long, at that time. I know, because i had it just to my feet before it got loose.
This year i went back to see if it still was there. When getting closer to the little pool i use to see them i saw a bigger fish fish getting away. I asumed it was the fish i have seen earlier years or another one, just as big. But when i tried to catch it in it's pool i started to get some really good looking perches instead of the trout, i was looking for.
Perches were really fat and had those fine colours. The water is really clean and the bottom on the stream is sand, so that's why those perches have the troutcolours. They were in really good condition and they all ended up in the smoker at home.
But i got one of the trouts in the stream aswell. A smaller fish, around 50cm. I saw it was lightly hooked so i let it free even without touching it.
The photos of that fish are somewhat blury, but they'll have to do.
All perches and the trout bit on a Mepps spinner, nr:2 copper with red dots. 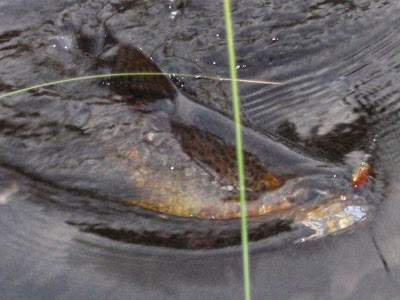 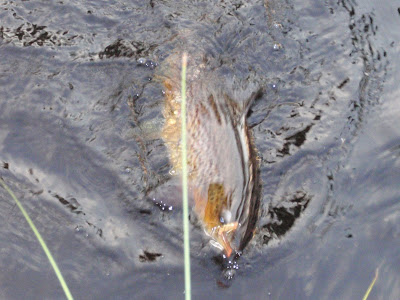 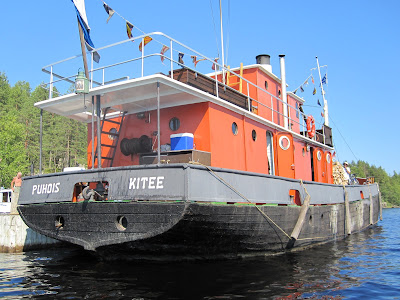 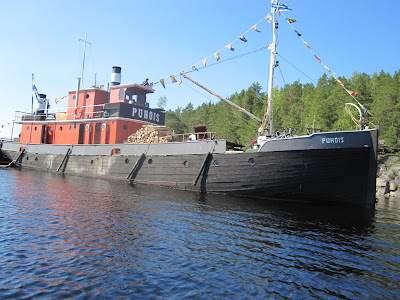 On saturday, july third, we came with 23 other steamers to Varkaus, southeast Finland. City of Varkaus was the host for the regatta this year, so that was the reason why we ended up there. Saturday noon when all boats have arrived a conferencier introduced all boats. Names, owners and their purpuse during the times when they were used on the lakes. Towboats, cargo or passengerships arr the most common boats. S/S Puhois is really rear. Her hull is made of wood, has 20 beds and a sauna + we can sit 20 persons and have dinner at the same time. She's very roomy.
When conferencier is done he tells all Kaptens to blow the horns on their ship and that is a serenade out of this world. The serenade goes on for a minute...I wanted to record it this year, but i didn't hear the conferencier at all, so i missed the start and most of it fumbling with my camera. When i had it ready the serenade was almost over, but i was suprised of the little extra concert that followed.
I have a little problem getting the filmclip here at the moment...I'll post it here as soon as possible.
kl. 20:20 No comments: 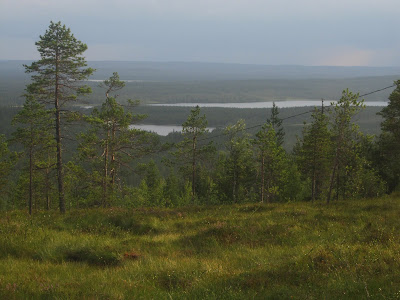 The photo is taken from Vierustunturi, Lappland, North Finland. This is the outbackcountry where i use use to hang around most of the summers, but now it's about time to update this blog and get into the ordinary life again. I'm back in Sweden. Atumn is up, lot of things will be caught up and that means lots of fishing.

I have had a really good summer up in north Finland and I will post some photos from there trying to show a little of that part Europe and what i have been up to there in the last two months. Plenty of fishing off course, but also a visit on to the old steamer s/s (steamship) Puhois has been documentated and i'll post photos here as soon as i pic the nicest shots.

My fishing this summer have ment many kilometers of walking. No paths or trails leads to the little streams and lakes i like to fish in. Very simple.

That means i have very little things with me. One rod, some lures, a bottle of water and my camera. Water and something to eat is not always necessary to carry, since there is plenty of grapes in the forrest and freshwater springs just about all over the place. No need to be hungry or thirsty there, for sure.

The fishing is as far away from fishing from a trollingboat as it can be. Summertime is a good time to go thrue many things, to think back, do some reflections, such as the way of fishing i have done for several years now.

In a natural way of looking on that kind of fishing it doesn't make sence at all. In our lakes and seas, population of fish is getting less. That's a fact. And there we go, trollingfisherman, with our boats, ten rods or more, boats stuffed with electronics, consuming petrol that makes only oilindustry happy...

I still like to be out there with my boat, weird, eh? It's very easy to get addicted to that kind of fishing. It is fun, and splitting costs, planning the fishtrip, makes it a little bit easier to get away with the enviromental costs on the nature and the bad concious in my mind, i think. The contrast between trollingfishing and my fishing up north is just as black and white. There are scimilarities in theese ways of fishing, but i leave them for now.

Andreas with his Tiveden project, Bert and my brother, chasing trouts and mullets and everybody else using very simple equipment trying to make the fishingtrip to more than a trip when cooler has to be full to make it a succesfull fishing, getting closer to the pure thought of fishing. Having the opportunity to catch a fish and release it aswell is nice. Verticaljigging has become really popular and i look forward to try it myself sometimes. I just like the idea of how ”nonematerial” that fishing can be. Still the boat can be used and almost all electronics with it, so that part is not wasted. Boats costs a lot of money to buy and own, so they should be on the water.

I (we)have slightly started to use less rods on our boat when trollingfishing. Brother has talked and pracised about it for years and both Bert has has done it that way aswell for decades. 6-8 rods when trolling - simple as that!

We try to go for the big ones in a way we belive in. Maybe we get less fish, but we like it that way since I full cooler is just not fun anymore. A couple of fish a day is just enough, if we even catch anything at all! If we need more to eat, we can just go and buy it from a supermarket. Cheaper for us and better for the small fish that we don't have to through back, maybe bleeding but definately full with lacticacid, making it very hard for it to survive when put back in the water.

Reason why i write down this thoughts is based on a happening yesterday, actually:

I went to a place that is good for raspberrys. I went past there on sunday when i was out running and found nobody has been there. Grapes all over the place! When i got there i saw a figure crawling down there from a huntingtower, that i haven't noticed before! The figure looked like a mix from the movies Apocalypse Now and Mad Max. He had a poncho or jacket and a hat full with feathers and leaves. He looked like a big bird when he jumped down from the tower securing his rifle. That rifle was BIG. It had a silencer and binocularsight sized like a 1 1/2 liter bottle. He was clearly pissed off, blaiming me from ruining his hunting! Maybe i did. I apologized but i also told him there were no signs informing me that there was a hunting going on. He took off and i picked my grapes. Now, afterwoods i can tell i knew the hunting for roedeer started yesterday but i i have forgotten about it and i didn't know that some people had their huntingareas just close to public paths...

Well, i saw that man, equipped up to his teeths with gear that in my eyes was just to much to kill a little deer, and somehow i just got to wonder what does people think of me when i come in my boat, ten rods on the boat, electronics aso?

Does that little fish really have a chance?

I have nothing against fishing from boats, but atleast i will pick my fihingtrips carefully and use less rods, single treblehooks on all baits, is a good way to spare smaller and wild fish.

Our fishing has become better using that "Less Is More" philosofy, i think.

Fisherman get to buy and learn to use the gear properly, less fuel is consumed, unvanted fish is saved.

Everybody is happy...probably the roedeer aswell, since they could eat the rest of the raspberrys when the scarecrow was off from the tower, hehe.