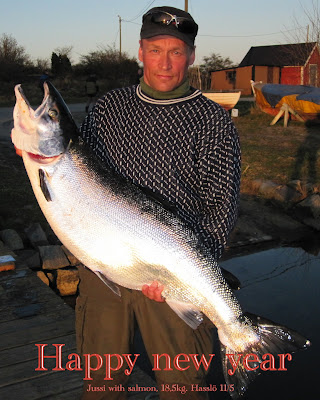 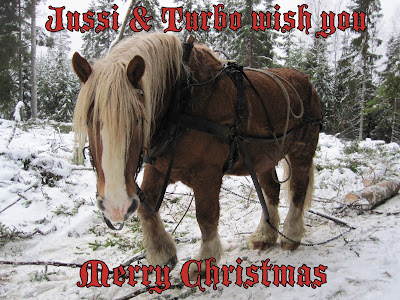 Out in the last minut without Gravlax on your cristmastable?
If you have an vacummachine and some salmon, that will sort out very fast. Put the fish and whatever your want, whisky, dill, whitepepper with salt and very little sugar in the plasticgbag and just vacum it with high pressure. Dont use table salt but grainsalt. The pellets will shoot into the fish by the pressure and you will have the fish ready in 10-12 hours. The fish will be in the bag till servingtime and the salt will not dry it out so fast because of that, so there is no need for so much sugar. Yummy! 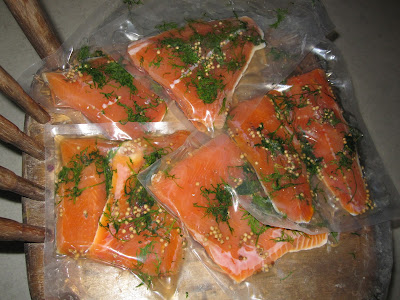 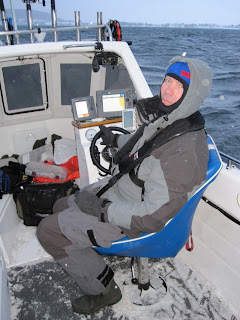 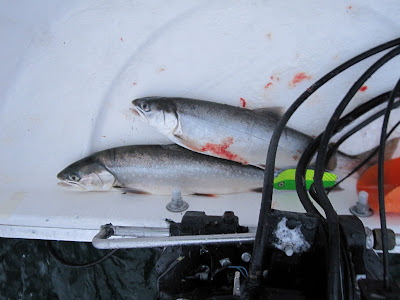 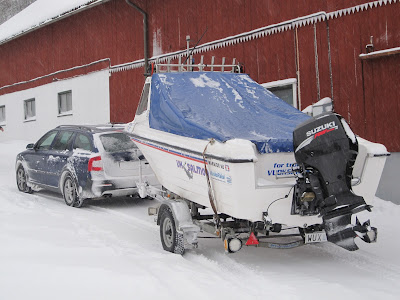 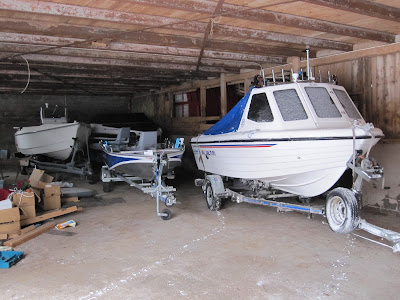 Getting the boat in the water is one thing. Getting it up can be easy too..

..atleast wintertime with an aluminiumboat! 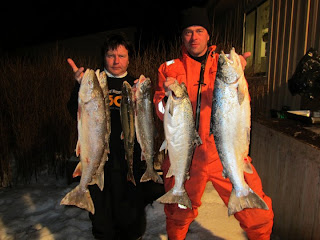 Finnish Pro fishermen had a fullpott during tuesdays fishing. Salmon 5.4 and char 3,4kg as the best fishes. Two nice fish hit and left 100m line behind them before they got loose. Both on riggers and surface. Anoher finnish boat raported an 8kg salmon taken from the same area, wich is just outside or little bit south of Omberg. They used mostly Salsa and Vk-baitheads for their baitfish. Chrome experimental and dark, purple glow is the most productive colours on the baitheads and flashers. Pro fishermen do their last full day tomorrow. See you in Finland!
kl. 00:01 No comments:

..or mad enthusiast. Judge for yourself from looking at photos below.
Finnish Pros stay at Borghamn Hostel at Jarmos place for almost a week. Targeting mainly the salmon but whatever in good size and right colour will do. The bites were very few during sundays fishing. Could have depended some on the weather! 10m/sek northerly wind and seven degrees below, is not the best conditions to fish on Lake Vättern.
We had some problems with reels and downriggers collecting ice, but still some fish decided to bite on our baitfishes. One char in orangered christmassuit visited the boat and was released quickly aswell. Another fish went on but was lost and some other bites were observed. We fished out of Borghamn down south as far as we managed during the day and then back again. Lake Vättern showed the reason why to have great respect for this lake: waves grow twice their size in just some minutes and those waves can be very high and short. Watch your back when driving in tailwind here. If you dont have good speed when doing that the waves can break just behind you and the water will end up in your boat. Buy a Ursuite, watch your back when driving in hard tailwind, be careful. Or, maybe best of all a day like this - stay at home!

Suomi - Finland, december sixth. Public holiday in Finland.
My own photos from regattas with steamboats with plenty of Finnish flags to celebrate our Independence Day, december sixth, 1917, when Finland became independent from Russia.