Summer up north was fine. Good weather with enough of everything, fine balance with some rainy days, but mostly overcast. I had a nice flow in most of my projects; getting firewood for a long time, restoring buildings, training and at last i did lots of fishing. Mostly we caught perch, pikes and some smaller trouts. So my intake of protein this summer was based on fish...Some sausages went down too.

In case you want try to get some really nice char, Lake Vättern is the place to fish. We fished out of Hjo on thursday last week. The boat was in water from early afternoon till sunset and in those few hours we had a fair number of char in the boat. We kept some for the midsummer feast and the rest of the fish was released outside of the boat, as usual.
Fish took on baitfish behind dodger and flasher, baitfish behind actiondisc, on flies, both in in surface, 50g lead and on downrigger between 40-80 feet. No fuzz, simple fishing. Go for 25-35m deep water, east of the harbour and there's lot of baitfish and all the other ones that gives a nice go on the rods.
Watertemp. is not mixed up, so it's easy to find spots that held fish.
I had Stefan with me on this little trip on thursday. The fish in his hands is one of the ones we kept for the grill.

Have a jolly fine fishing everybody all around the sweet lakes we have to take care of.
I have been writing back and forward to Havochvatten.se about the salmonfishing in the Baltic sea.
The new regulations almost went thru; due to them, if we caught a salmon with adiposefin left (wild salmon) we should have thrown it back in the sea, dead or alive.
Now, there is only 40% of planted salmon in the Baltic sea that has their adipose fin cut off, since Sweden is the only country of them around the Baltic sea that do this. So, it's hard to know if it's a wild salmon on the hook or planted, so therefor the new regulations were put on ice.
I was looking forward to new regulations, a plan to save and look after the population of wild salmon in the Baltic sea. Giving us something to follow we could have said also the regulations in the northern part of the sea must be looked over, all in mind to save the wild salmon.
Now the rivermouth of Torne älv is blocked by nets. Swedes blocked it june 19 and Finns will do it june 25. Opens up on september 15.
Up the river you'll find teams, approx. 50 of them that fish with nets and something called kullenät. These teams are not fishing for their living. They reported they caught 3094 kg. salmon last year with their nets. That is 300 salmon if averageweight is 10kg...That is clearly false numbers. I'm working on to prove it, so i leave it for now.
A have all the numbers of caught fish in the Torneriver, (numbers reported).
I must say it's gives a strange feeling when looking at all these numbers and at the same time look at the new regulations that almost went thru for us fishing with boats, rod and reel in the sea.
Due to new regulations I should have thrown back wild fish, maybe dead, in the sea when they haul up wild fish in nets in the pearl of wild, untouched rivers in northern europe, Torne river.
It's nuts!
I recommend you to read the regulations on the Finnish-Swedish boarder commission homepage .
Click on the banner in Swedish and then http://regeringen.se/content/1/c6/14/50/40/b597d13f.pdf
There is some 90 pages, but you'll soon find the interesting parts.
Now, when you have read it; contact Havochvatten.se by sending them a question to http://www.havochvatten.se/om-oss/kontakta-oss/skicka-flaskpost-till-hav.html how they will deal with our fishing contra the fishing they have in the rivers up north with nets.
The more of us that send mail to them, the sooner they have to start dealing with it. Show intrest!
Ask them simply how they can have rules and regulations from year 1800 in the rivers, when sportfisherman are put to regulations 2012 with the meaning of saving wild salmon.
Do a good job and have a nice summer.
I'm off to Lappland tomorrow. Back in august :-) 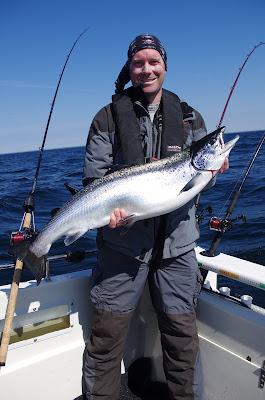 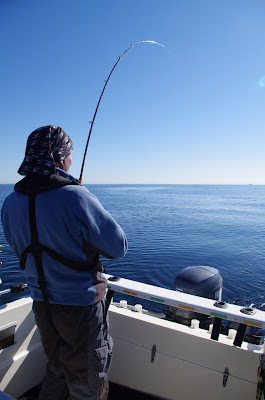 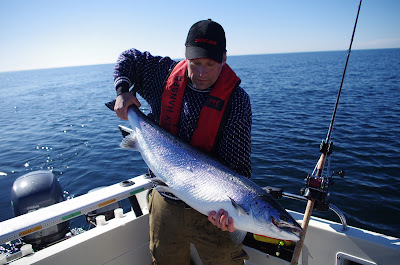 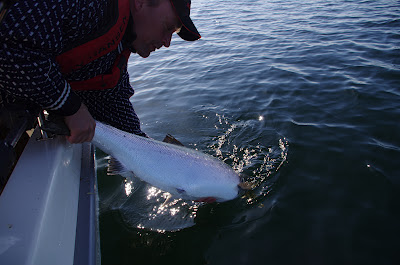 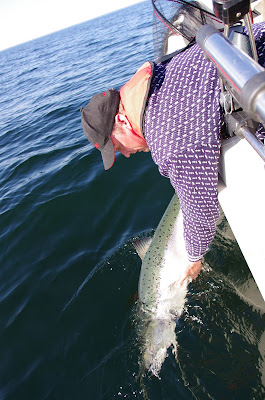 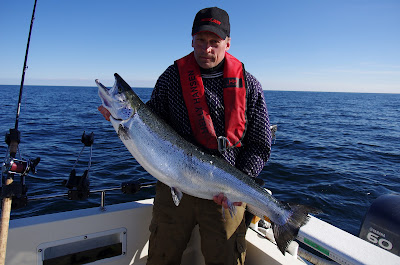 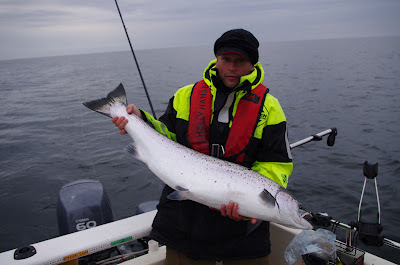 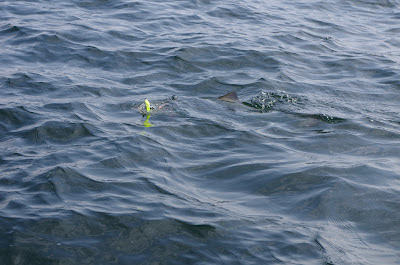 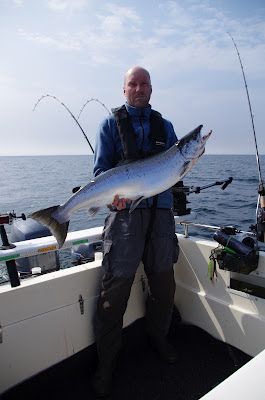 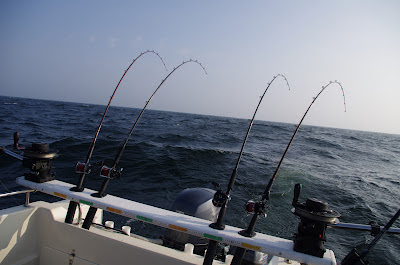 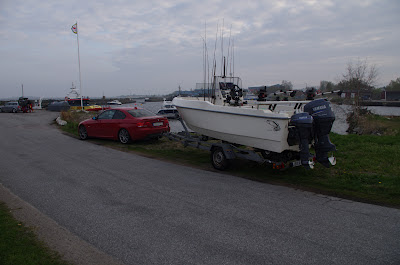 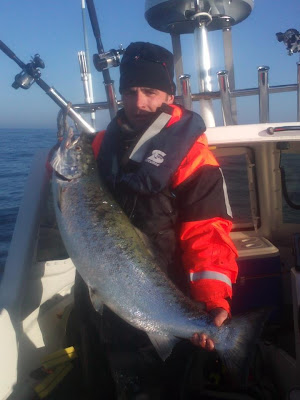 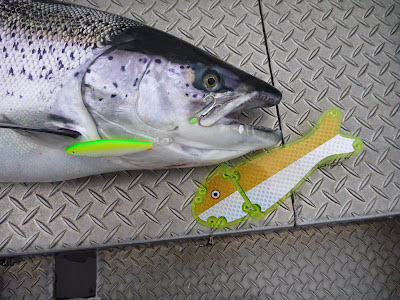 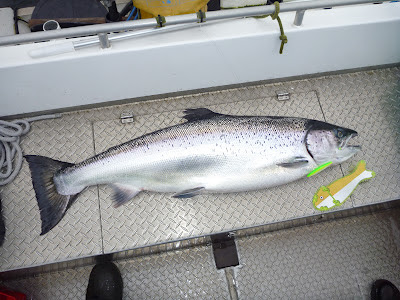 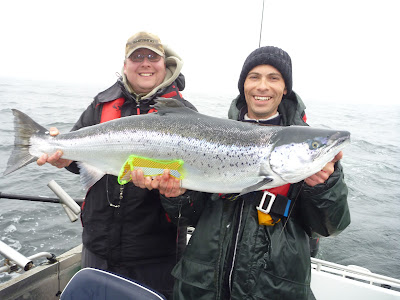 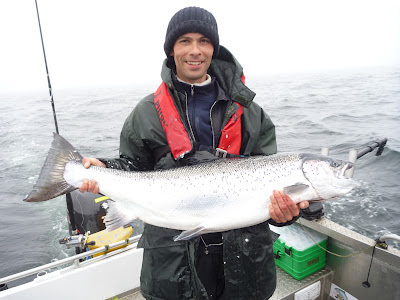 This film shows four salmon caught. We had a really good day since we caught four salmon before noon. We thought we had enough so we left the place and went home. The fishes weighed between 9.5
and 11.5 kg. All fish were caught on the same location. A little sweet spot middle of the ocean.

We have cut our clips from fishing in Blekinge, 2011 into the first film out of three.
The films have been done late! Almost time to get ready for a new fishingseason in south Baltics. This first clip has a lot of noise disturbance from the wind. We later covered the microphone with a soft foam and it made it better in the coming films. Lot of screaming reels in the films, so we didn't want to cover the noise with music for an example.
So here they are; an apetizer for everyone who's going fishing there.

These days were spent at Jarmos hostel in Borghamn. I brought my mother and some relatives there for celebrating her birthday. The place is nice and quiet and also a perfect spot to have as a base for fishing out of Omberg area. I went fishing a couple of days trying to hook one or two salmons since it's to be good fishing around there now.
Friday was a windy day. Some 8-9 m/s northwest with gusts reaching 10-12. On the eastern side of the lake it can be tough fishing, but in my Warrior we had no problems managing the waves or the wind. We used five rods and hooked a double Lake Wättern triple. Two salmon 68 and 75cm, two char 60 and 65cm, two trouts, one legal size and the other under size. But still, - a Lake Wättern triple is a really nice catch.
On saturday there were King Winter Salmon i the area. A fishing competition all over the fishy spots! Some boats came really close to us, obviously not having a clue about the rules to be followed so we don't mess up our boats and gear in a hellball.
Well,well, i tried another spot instead. We caught ours salmons day before so there were no rush after them. It looked really good some time during early afternoon and then it started to snow. That was it, fishingday was over for this time. And it seems as Bay of Motala will have a rest for some time since there is thick ice at the boat ramp now.
Before the snow started to fall we caught a 60cm char and had a nice strike on another rod. The planer backed and lifted a meter up i the air, so there were a nice trout or salmon on there for a while but it went loose. Both days a flie caught most fish. Home made apex took one fine char and a baitfish behind a flasher had a couple of strikes too.
Pics taken of Markku from Norway.