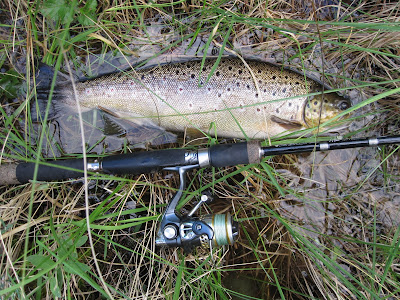 This browntrout i caught this summer. It's one of the fishes that has been a longgoing dream to get on a hook for me. As long as i have been able to fish i wanted to catch a fish like this and for the last 4-5 years i have every summer been back to a special little creek in northern Finland. I found out that this water cept a few very good looking trouts so i have tried to get one on the hook from this creek the last few years. I have always seen one, had them on the hook for a second or as last year i got one trout but it was a small one comparing to the one i got this summer.
When i came to the little creek i knew i get only one or two throws with my meppsspinner, then the fish will spook and i have to come back another time. So, at my location, just in the bend in the end of little bit more current water i threw my spinner upstream, maybe ten meters. It was just one meter broad where i had to place the spinner, so it had to be perfect right away. A second throw on this spot would not work. I knew this place was the feedingtable for some of the bigger trouts. I had already went thrue some of the other places and have had no contact with fish elsewhere, so the pulse was quite high when i saw the spinner, almost in slowmotion, hit the exact right place, where i wanted it to be. After just two rews on the reel i had a hell of a strike on the spinner and the show was on. The fish had the whole little pool to mess around in and it did. Sharp rocks, weed and treeroots were all possible places where to loose the fish. But this was my day. The trout was hooked well and easy to release from the spinner after the battle that took some five minutes. As usually i took the fish as hard as i could, not meaning ripping it out of the water. I knew that fish will be released so i kept it in the water all the time and even in the photographingmoment i kept it in the water. It was some 44-47cm long, fat and generally very healthylooking fish. It was released with not a single mark on the body and after a little rest it dissapeared in the deeper water in the pool. I saw a glimpse of it later when it had placed itself in the most current place in the creek. It's there now, to live and breed. This was for me a perfect catch. There is many, many more creeks that just waits to get explored, so i have several locations to aim for in the next hundred years i intend to live:-). It will be a lot easier to acess these kind waters on a horse and that is a part of a new project i'm up to now.

Trailer from our salmonfishing in Blekinge in may.

Here is the trailer from our fishingfilm. Bert made it this summer.  Salmonfishing in Blekinge in may, at its best. We'll try to have the film done as soon as possible. Till then; take a look at Berts fantastic mulletfishing this summer on his  blog. Lots of screaming reel there:-)
www.fiskeberra.blogspot.com
kl. 23:29 No comments: