We tried our little lake a second time today. Same stile this time, trying to battle with big perch, that habitate the lake....we have heard.
Me, Bert and brother went there, in good minds. Weather was perfect. Fairly mild, wind from south. Slight breeze.

We fished off the area where we ended our fishing last week and continued just a few hundred meeters south from there and then we found what we came here for. Except for the fine company, nice lake and weather, we caught some really nice perch.
We had only one bite each on our roaches, during the whole day. Those fish we got up were good looking. They were no fish for the recordbooks, but one was really big, in my eyes.

Perches weighed 1.340kg. and the other one was not even weighed. I think some 500g.
Theese two fish proved us bottombouncing works even in beginning of november with 6.5 degrees C, in the water.
Perches of these sizes give a good go on 12 foot long matchrods with sensitive tops, and leaves a feeling and must trying it again, off course. Definately a method to explore more.

Berts Quintrex leaves nothing more to wish on a fishingboat. It's amazing how much fishing you can get out of a boat only 3.90 meters long. Three grown up men with 12 feet long rods and no hazzle at all.....or maybe we had a small caos some minutes when trying to land the the big perch. Big salmon is no problem, but when we get big perches we get unfocused like little boys, hehe. Live to learn...
Look at Berts blog, for a filmclip from the fishing.
And Brors blog for some more photos. Both fish were released after photographing. 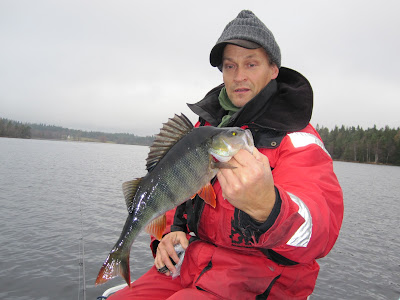 And this was the first. 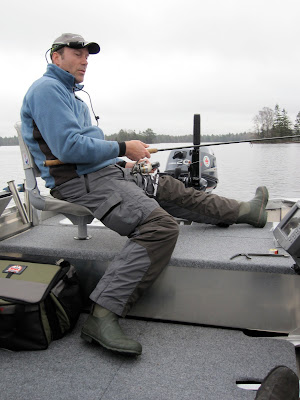 Mr I, himself. Ipilot stears the boat, Iphone keeps us updated on his blog.
Can you see the camera on his cap? 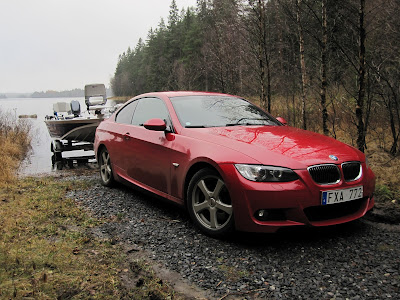 German steel and and Australian aluminium.

..Or in other words - Testing Berts Quintrex and try to fool some perch with bottombouncing tackle.
We did ok, i guess; caught some perch, but not as big as we aimed for. We used 10-12cm long roach, but still got ordinary sized perch. Not the  big ones we were after.
Using bottombouncing tackle is a new way of fishing for perch for me, so that had to be sorted out too. So trying to catch megasized perch, in a new boat, in a, for us, unknown lake, that we haven't tried before, on a cold octoberday, raining almost nonstop, was not easy.
This boat has never been fished from before, only testdriven and used as showboat at Wollmars sportfiske, Borås a couple of months. They are official Quintrex dealers there.
So, today was the day to try it out, the Tinboat! Conditions may not have been the best, but we fished enough to clear out some questionmarks.
-We were three people in the boat and we had no problems moving around in the just under four meters long boat. It feels a bit odd, considering the boat is very roomy and steady for being so short.
-Lauching and taking up the boat on a boatramp that isn't a boatramp, worked just fine. The boat is very light and Berts Bmw 330 coupé has fourwheeldrive, so even that was simple.
Brother and Daniel fished from a Quintrex 440, and they used the same ramp, and brought up their boat with a Volvo 745 and that worked fine too. There were some nasty sounds coming from the boatbottom when launching the 440, but the boats are rough aluminiumboats, so they can be treated like that. A glassfiberboat would have left a major part of gelcoat on the beach from this kind of beating.
The 390 went in the water in 30cm. shallow water without touching the bottom!
-Bottombouncing tackle for big perch is fun!
Very good day. Testing with new techniques continues.
Look at Berts blog for more info. 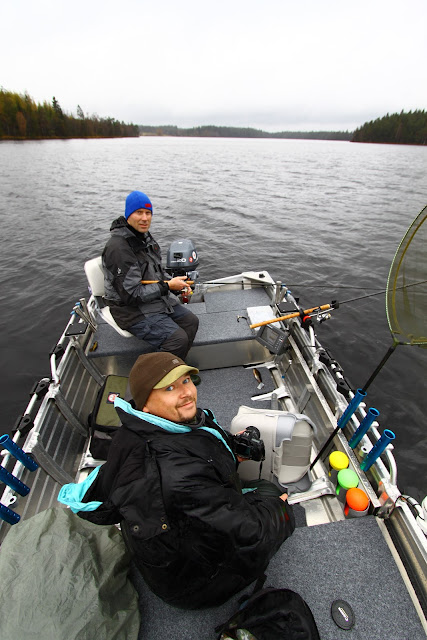 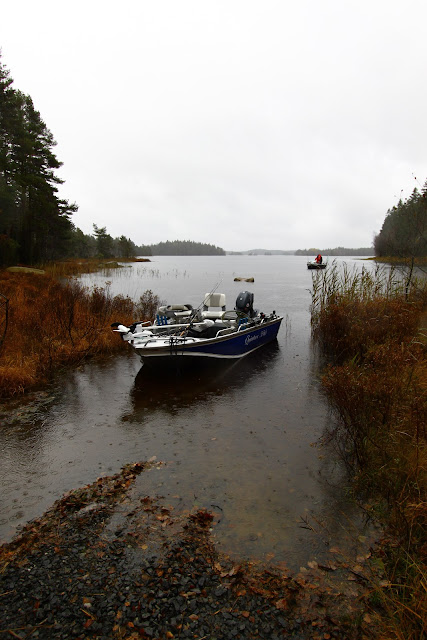 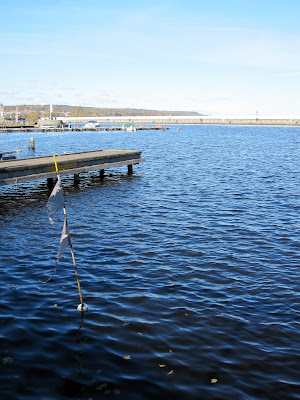