Testing the boat and gear after 10 months rest. Took a while to prepare the little warrior but after sunset on Friday evening it was done. Took off to Lake Vänern on Saturday morning and went out from Spiken harbour.
Decreasing wind made it comfortable rest of the day. Had a half day fishing and had 15 contacts, 10 of them in the boat and 2 with us back home.
Fish bit on bait heads with chrome, bluegreen and pink. Best was the gold green Vuoksiraksi with 30 g. lead. Only 4-4.5 degrees C in the water. According to the vhf people had good fishing at Hinden. With warmer water it's going to get better around the Kållandsö water.
Mate of the day was a collegue from work.

Friday, may 15. A windy day, but between the gusts some fisk decided to bit on whitefish equiped with baitheads. I almost had an Vättern triple x 2, but didn't catch the remaining trout. Also threw back the trout i caught. It was a 2,5kg, very good looking trout and with the hook coming loose out of his mouth the choise was easy,- back it went. I released four fish this day. Brought home a salmon weighing 7 kg, char 3 kg and one more char 55cm long.  Not to many out on the lake today, though, i and Bo Pedersen, team tortuga, caught several nice fishes. He and Ivan from Denmark caught a nio kg. heavy salmon among some other smaller salmon and mainly char. Looking forward to fishing lake Wettern again. 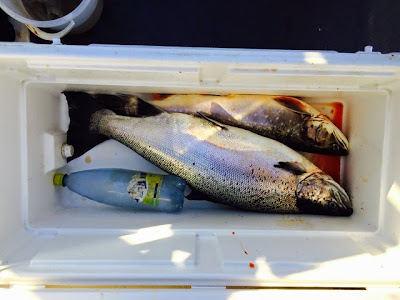 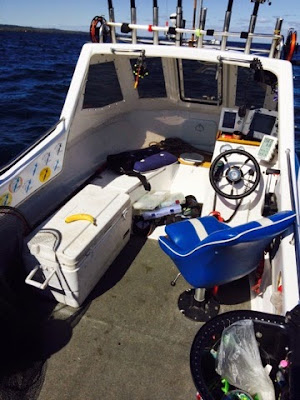 Tested the boat and equipment. Out of Husqvarna harbour. Everything worked fine. Even had a couple of bites on my baitfish. One of them went home with me: a trout 60 cm long, in good condition. Fine day. 5-5,7 c in the water. 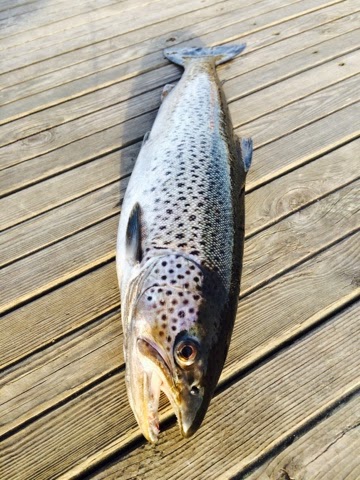 I had my friend, Sven Hille fishing with me on wednesday. We fished out of Hästholmen.
It was a little bit windy during midday, but we managed to get some fish bitting on our baits. Smaller fish kept us busy in the morning hours. At that time we fished close to land but a change in our plans made us leave the place for another spot and it was wortwhile since we started to catch several bigger salmon.
3.30 pm we had five salmon and one char in the boat. Salmons weighed between 5.5 and 3,3kg.
They bit on flies, minnows, natural baits with holders from Vuoksiraksi, Salsa, Anchovy special. Also flashers and action discs worked fine.
It was a good day to show Sven the fishing on Sweden's second biggest lake.
It was a good day to show how well the Warrior works on Lake Wettern.
The wind wasn't too bad, but waves got high in the gusts and as usual they were at the highest when the fish was on the move and we more or less fought fish for 45 minutes in a row, i think it was. Sven also owns a Warrior so we had some experiences to share.
I have also updated my Warrior with one more GPS-antenna. Now it has double security.
Next trip to Lake Wettern will be after Vasaloppet. I'm participating in that competition and need to practise a little more.