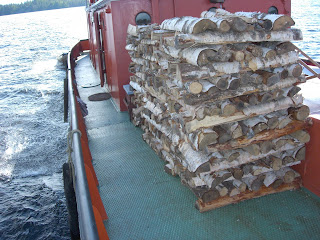 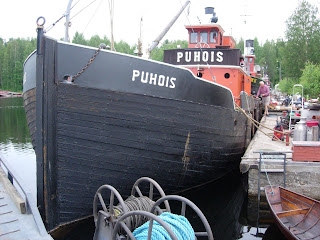 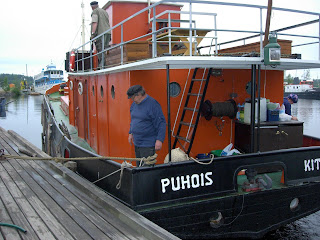 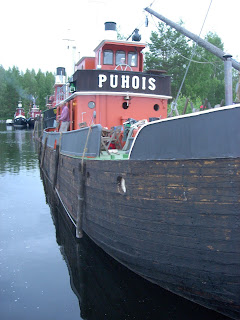 Here are som photos of a really nice boat i use to work on summertime. S/S Puhois is one of two remaining steamers in Finland, with the hull built of wood. She had a duty at times when logs were transported on water; she has a crane, crew lifted up bunches of 25 logs and wrapped a steelwire around it, for easier handling for the towboats. She is now on museumregistration. That means she has to remain original, atleast externaly. She has about 25 beds so there is plenty of space on her. There is a sauna too, wich adds some luxury to it.
24 meter long, 5.1 m wide makes her a big vessel. She has a 65 hp engine. Not many horsepowers, but the torque is massive. She will cruise at 6 knots, with 8 as topspeed. With tailwind of course:-) I am lucky to have been on S/S Puhois for some summers now. I'm a stearmen and deckhand on her plus just be around and do this and that kind of sources. There is also a set of downriggers to use, so i can use this pearl to go fishing ;-) Quite unique trollingboat, eh?
I have hundreds of photos of her and i will add some more later. The photos didn't appear in order here, of some reason. Last photo should have been first. Well, well.../ Jussi
kl. 23:52